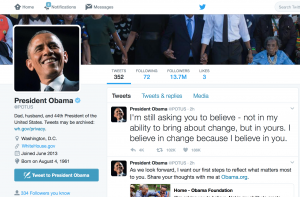 Immediately after the swearing in President Donald Trump today, before he could finish his 15-minutes inauguration speech, the @potus and @flotus accounts were handed over to Trump and Melania.

Interestingly, during the transition, all tweets were cleared and the account registration dates were reset to today.

The followers were reset as well but grew exponentially immediately after the reset, particularly for @potus. By the time President Trump finished his speech, the @potus account already had 3.64 million followers while @flotus was at 8022 followers. Knowing the US propensity for regulating information, all the contents that has been reset has probably been archived in some way.

President Obama’s use of twitter had been modest, relative to President Trump’s. Even though Obama had had his personal twitter account two years longer than Trump, he had 15 400 tweets compared to Trump’s 34 300. Obama’s twitter remain lower even when combined with the 352 tweets from the @potus account, in the three and a half years he has been using it.

However, while he had almost half of Trump’s tweets, Obama still had 4 times more followers, 80 million, compared to Trumps 20 million followers.

It will be interesting to observe how the accounts will be used henceforth. Vintage Trump is likely to continue with his fiery use of twitter that is an unrestrained, which although unorthodox for a person in his new position, but does have its benefits, as evidence by how some of the big US companies have reacted to his tweets in the past 2 months.

As a relatively new platform, there has not been many such transitions on twitter, and other social media platforms. It thus presents a lesson for practitioners and clients alike on how to handle official accounts that are opened in the name of official titles people hold in organizations, which will be a topic for another day.